For these too young to have seen the work of modern dance pioneer Daniel Nagrin performed by the choreographer himself, Shane O’Hara’s “The Nagrin Project,” presented at Dance Place on Saturday, came as a surprise with the force of revelation. As reconstructed by O’Hara, these works prove Nagrin to be a major artist, at the forefront of experimentation over the course of three decades.

One could speculate why Nagrin has not received his due from dance historians. Certainly the fact that he chose to work as a solo artist in a form that regards group work as expressive of a more developed sensibility is a factor. And undoubtedly his partnership with the better known (though equally undervalued) Helen Tamiris is also relevant. His commercial work on Broadway early in his career also left him open to criticism as modern dance fought mightily to dissociate itself from entertainment.” But perhaps, as revealed by the “Nagrin Project,” it is Nagrin’s constant experimentation that has worked most against this recognition.

“Strange Hero” and “Man of Action,” both created in 1948, are incisive and forceful character studies that develop through shrewdly observed rhythmic, dynamic and spatial expansion of vernacular gesture. A cigarette dangling from his mouth, the “Strange Hero” is a jazz-inflected criminal, all exposed nerve endings and caffeinated responsiveness who shoots his way through an urban jungle and salutes his murderer as he lies dying. In the companion piece, it is John Q. Public who faces the urban nightmare, struggling mightily but futiley as he runs after his own life. Both works have all the grace and perfection of a classic 3 1/2-minute record.

Two works from the next decade, “Indeterminate Figure” and “Someone,” reveal Nagrin searching to make his choreography have greater depth and relevance to the larger world as he embraces ambiguity, abstraction and weighty issues. In what must be one of the first uses of tape collage in dance, Nagrin’s score includes the sounds of a bomb exploding, of rain and of a human heartbeat. Dressed in silky pajamas suggestive of camouflage fatigues, “Indeterminate Figure” is a chameleonic Everyman in constant motion to live his life ahead of the dropping of the H-bomb. In “Someone,” Nagrin gives us another regular guy, this one not really sure about things but sensitive and exquisitely alive.
The dances from the ’60s reveal Nagrin still pushing at the edges of experimentation “Wordgame, a Cartoon” is a 10-minute excerpt from Nagrin’s Peloponnesian War Concert, a two-hour, anti-war solo created in 1968 at the height of the Vietnam War. An indictment of the technocratic sensibility worshipping power, money and blind reason, “Wordgame” makes use of another sound collage and a cinematic style to capture a mendacious politician in all his manipulative phoniness. “Path” (1965) was equally stunning-as pure, bracing, astringent and minimalist as a Barnett Newman painting. Carrying a 12-foot-long 2 by 4, O’Hara makes a long, inexorable advance diagonally across the stage, never varying his simple stepping pattern.

The evening was a shared triumph for both choreographer and performer. In his book “How to Dance Forever,” Nagrin describes performing as an act in which “one gives over being careful and risks opening the dark gates of one’s inner being.” There is no more apt description of O’Hara’s rendering of Nagrin’s work. The “Nagrin Project” is the culmination of seven years of reconstructive work by O’Hara, and his care shows in every aspect of his performance. In subsuming himself – body and soul – to Nagrin’s vision, O’Hara seems to live inside these dances. 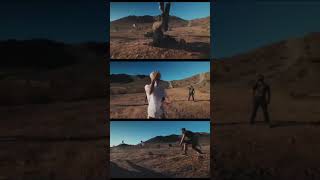