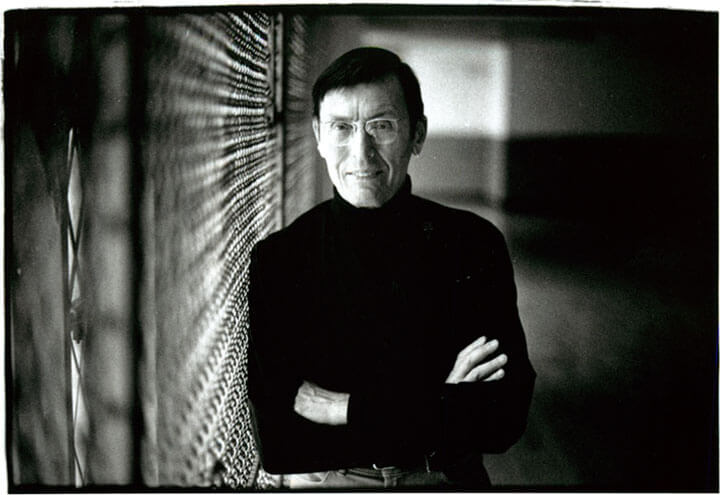 “Been there, done that,” Daniel Nagrin might say dismissively, but instead he has written down the lessons learned along the way in three lively books (see below). His credentials include summer resort gigs, club dates, Broadway musicals, acting stints, solo concert work, cofounding the Tamiris-Nagrin Dance Company, and six decades of teaching, coaching, and choreography.

It is eye-opening to realize that he was born in 1917, a year after Martha Graham, with whom he studied, began taking her first dance classes at Denishawn. At age eighty he is still actively engaged in exploring and sharing his knowledge of dance. His latest book, The Six Questions: Acting Techniques for Dance Performance, examines the art form in prose that has the kinetic energy of jazz, whose varying rhythms he has explored so fruitfully onstage and in the studio.

Nagrin grew up in New York City and sampled the social dancing at Harlem’s Savoy Ballroom during the 1930s heyday of the lindy hop. Later he lectured and demonstrated how jazz saucily influenced social dancing. Starting with the cakewalk, he pointed out how it exuberantly and humorously expanded polite ballroom dancing, how the Charleston functioned as a peek-a-boo step toward women’s liberation, and how the intricate lindy formulated a male-control dance.

As a performer, he was particularly interested in roles featuring the male as outsider. For him, jazz was not a finger-popping, torso-twisting game of self-involvement but a tool to explore character. His most famous solo, Strange Hero (1948), originally Strange American Hero, was about a classic outsider, the gangster. He didn’t always admire the characters whom he studied, but looked to find the innocence (his word) of the character-in essence, the guiding code of conduct, whether good or bad.

As a child, Nagrin restlessly took breaks from doing homework to move around to music on the radio. Later, he realized that he was dancing. He took his I first formal classes at the New Dance Group and at Graham’s studio. He arranged his own academic program at City College of New York to include dance and organized a campus club that invited dance teachers to give weekly classes. He had the opportunity to see the work of the founding generation of modern dance, among them his future wife, Helen Tamiris. While in college, Nagrin began to review these dancers for the school paper, The Campus, and to express his own basic artistic sense by praising works that spoke about humanistic values.

After graduation in 1940, Nagrin auditioned for a resort job at Unity House, where he met Sue Ramos and fell under the spell of her jazz dancing. They worked together for a year and a half; then he found himself selected for a revue choreographed by Tamiris, who introduced him to club dates. Following service in the Army Air Force, he began appearing in: Broadway musicals that Tamiris choreographed and also joining her in concerts. As early as 1944 he had prepared a solo on abolitionist John Brown. In 1948 he began choreographing a series of solo portraits of conflicted men in which social concerns were reflected. How does one live in an urban environment (Man of Action), or use “outsider” music (Jazz, Three Ways), or establish a place for oneself as primitive ,man had done (With My Eye and With My Hand)? He further examined the situation of a man caught in a racially riven society (Not Him But Me) or attempting to deal with the anxieties of modern life with a simple assertion of self (Dance in the Sun).

Meanwhile his Broadway career flourished with a string of successful shows which he was Tamiris’s lead male dancer. Nagrin won a 1955 Donaldson (precursor of the Tony) Award for her Plain and Fancy. After this triumph, both withdrew from show business to teach and work toward establishing a modern dance ensemble. The Tamiris-Nagrin Dance Company lasted six years (1960-65) with modest success. After Tamiris died in 1966, Nagrin began a series of tours, during which he became preoccupied with the U.S. involvement in Vietnam. By 1968 he had created The Peloponnesian Wars, a full-evening solo paralleling the Vietnam War with the disastrous conflict between Athens and Sparta.

In 1971 he formed The Workgroup, with dancers developing improvisational pieces to jazz rhythms. He celebrated his sixtieth birthday dancing on a gala program with fellow artists. Classical tap dancer Paul Draper strung together and developed phrases selected from solos Nagrin had created-a combination of classically correct bearing and elegantly percussive jazz riffs.

Nagrin was inspired by and worked with jazz before it was generally respected in the modern dance world. His own performing presence and virtuosity, his upright carriage and the infinite variations he wrought on the blues, pop, and bop walks made him a standout in any context. Pride and an assured presentation of the values in his subjects were present in the portraits. He placed the person accurately in the context of his time and continues in his teaching and writing to share that honest, no-nonsense approach to professional life.

Reproduced by permission of Dance Magazine from the November 1997 issue, page 78. Also referenced at The Free Library.

For Educational Use Only - Please do not distribute, or re-publish in Print or Online, such as another website, also including Social Media.