Dance And The Specific Image: Improvisation

“This book is written by a master–a master teacher, performer, philosopher, and explorer. Its mastery is evident from the scope and clarity of its intention. The book bristles with Nagrin’s inherent energy and directness. He is on of the few artists I know who has been able to give such lucidity to the nonverbal art of dance.”
–Murray Louis

“What an extraordinary book this is–combining history, philosophy, theory, and a guide to practical application. It provides a uniquely complete and integrated view of the connection between the professional movement artist and the movement educator, of the process by which what is taught in the classroom came into being. I can’t wait to share this remarkable book with colleagues and students in both dance and theatre.”
–Bill Evans, Bill Evans Dance Company

“Daniel Nagrin is one of our outstanding performing and creative artists. He is also one of our most articulate an insightful educators. His new book reads like one of his powerful and excellent solos. It is perceptive, honest, raw, immediate, witty, and highly original. One has the pleasurable experience of having a conversation with Daniel. This book is a must for any serious performer in dance and theater. Bravo Daniel!”
–Carla Maxwell, Limón Dance Company

“An incredible piece of work…. It is fascinating because it not only clearly sets forth a way of working in dance for teachers of dance, but offers a piece of dance history for dance historians, interested individuals, and student of the American cultural scene. The man, his movement religion, his teaching and performing style are all rolled up into one for all read and experience…. Utterly amazing!”
–Mary Goodman, Executive Director, Gateway to Music and the Performing Arts

“Dance is possibly the oldest art form but the least understood in our culture. Daniel Nagrin stands at the crossroads of two significant American developments: jazz dance and modern dance…. His is some of the most extraordinary, powerful and inspirational writing on dance.”
–Elsa Limbach, Dance Alloy

“Dance and the Specific Image: Improvisation by Daniel Nagrin is a major addition to dance literature. This is an important work, a powerful tool for the educator and layperson alike. It should be on the shelf of every practitioner of dance, drama and music.”
–Donald McKayle, artistic director of Dance at University of California, Irvine.

“Daniel Nagrin is one of the truly remarkable figures in the history of modern dance. As a riveting performer, influential choreographer and deeply inspiring teacher, Nagrin has made his mark on ever creative aspect of out rapidly developing art. This book is an absolute must for anybody seriously interested in the teaching and study of movement!”
–Robby Barnett, Co-director Pilobolus Dance Theatre

On the CHOICE list of OUTSTANDING ACADEMIC BOOKS of 1995:
The honesty, energy and directness that have characterized the author’s distinguished performing, teaching and directing career are apparent throughout this new book.

A Peer Reader Review:
Master teacher Nagrin brings to this exploration of the aesthetic dimension of dance, the precision of a choreographer, the experience of a performer, the astuteness of a philosopher, the adventuresomeness of an explorer and the clear empathy of the skilled educator.


After an extraordinary career in dance–as performer, choreographer, and teacher–Daniel Nagrin has now written an extraordinary book. In it he explores the roots of his aesthetic philosophy, influenced by Stanislaboski, Helen Tamiris, Joseph Chaikin and the Open Theatre, and his work on and off Broadway as an actor and a dancer.
Dance and the Specific Image includes over one hundred improvisational structures that Nagrin created with his company the Workgroup, and has taught in dance classes and workshops all over the United States. Designed primarily for dancers, many can be adapted for actors and even musicians.
In the 1960s, at a time when many modern dancers were working with movement as abstraction, Nagrin turned instead toward movement as a metaphor. His passionate belief that dance must speak of people led him to found the Workgroup, a small company of dancers who, in the early 1970s, devoted themselves to the practice and performance of improvisation.
Dance and the Specific Image is designed to be read by the general reader interested in dance history and philosophy as well as by students and teachers who will benefit from the techniques he describes. Nagrin invites the reader into the mind of a dancer totally absorbed in his art, one who writes with wisdom and authority about what it means to be an artist.
Daniel Nagrin lives in Tempe, Arizona. He was awarded the Distinguished Teaching Chair for 1992 at the American Dance Festival in Durham, N.C. In 1993, he was named by the National Endowment for the Arts as one of the four recipients of a new fellowship: Master Teacher/Mentor. 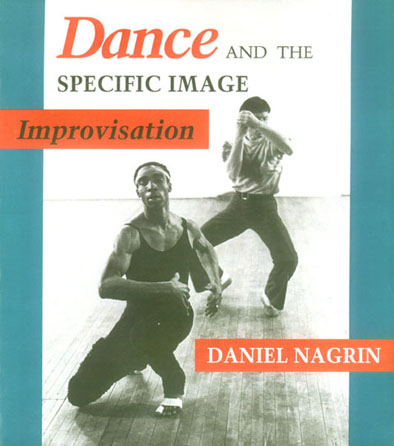